What is a good stock?

If you’re buying, a good stock is one that goes up.

That sounds simple enough, but it should be refined a little.

You want to buy the stock before it goes up. Buying a stock after a huge run is probably a bad idea.

So a good stock is actually one that is conditioned to go up but has not gone up yet.

The first condition I look for is seller exhaustion. After sellers are done selling, the stock has little room to go down, and future buying would encounter little resistance to bid prices higher.

The problem is how the stock looks. Remember that you're buying a discarded stock that many have sold. The picture is never pretty. Look at the chart of ETCC (written in a previous article, click to zoom in) below: 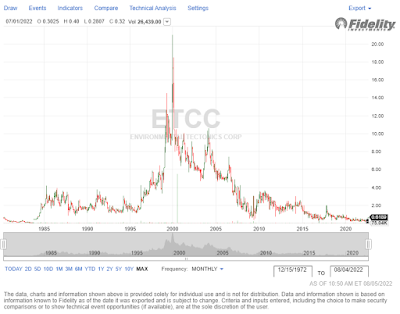 Buying ETCC now means buying at multi-decade lows, even below the lowest prices during the epic financial crisis in 2008/09.

And the stock may go lower from here. A multi-decade low does not imply that sellers are extinct. It means fewer sellers relative to when the stock price is higher.

The second condition I look for is potential. What does (or would) the stock have that would attract buyers?

This may come in the form of new products, new customers, existing customers spending more, industry tailwinds, and quality incentivized management among others.

The good news is you won't need much. Just a little optimism is sufficient to move the stock. Without sellers, buyers would bid prices up without resistance.

Uniroyal Global Engineered Products (OTC: UNIR) is a stock that meets both conditions. Look at its ugly chart (click to zoom in): 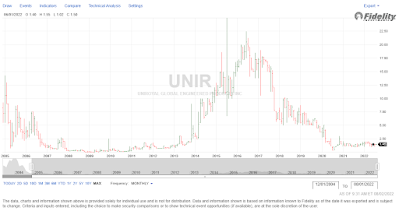 UNIR is not well-managed. Pre-Covid from 2013-19, sales were stagnant, gross margins declined, and debt ballooned by 60%.

Covid nearly killed the business, which was rescued by PPP and a zero-interest debt package backed by "automotive lenders". This is interesting. Who are these lenders? How are they able to extend financing at 0%? Why would they do so?

I suspect that the auto OEMs are the lenders. They are large enough to extend cheap financing to small companies. That they would do so to UNIR perhaps implies that it is important enough to their supply chains.

Fabric is a commodity. I'm sure auto OEMs can source it elsewhere given their size and reach. But global supply chain issues may make the economic case to source from local companies such as UNIR.

Geopolitical tensions may play a part as well. Sourcing cheap fabrics from China may no longer be an option.

UNIR may also benefit from rising ESG concerns about using animal leather. The company is most known for manufacturing Naugahyde, a type of resistant faux leather (and invented in Naugatuck, Connecticut, no less), marketed as cruelty-free fabric.

The shift towards more customized products appear to be working as well. About 24% of FY22 revenues are made in customized fabrics, up from 15.5% in FY19. The shift would eventually benefit margins, which are still depressed by inflation.

There are other reasons to be optimistic. FY22 revenues increased 19%, indicating a potential turn in the auto OEM cycle (and a much-anticipated drop in used car prices). Margins are slowly marching back from a combination of product strategy and cost controls.

This is a simple story if you believe that UNIR is important enough to auto OEMs such that when the OEM cycle turns, UNIR would be brought along for the ride. The turn should expand its multiple from a currently depressed .07x sales and .6x book to about .2x sales, where it traded during the cyclical rise.

The key insider is also a strong pillar for the stock. CEO and Chairman Curd owns 48% of Class A stock and 100% of Class B stock, and has been involved since 1992. He is also 83 years old, and may sell the entire company for estate planning.

Curd doesn't appear to be the best executive, but I give him credit for maintaining his stake for three decades and for not diluting shareholders when UNIR needed capital during Covid.

I don't know when the auto OEM cycle would turn. At this moment, recessionary fears abound, consumer spending looks likely to weaken, and inflation is at multi-decade highs.

All I know is that the cycle would eventually turn, and UNIR appears ready to ride the rebound.